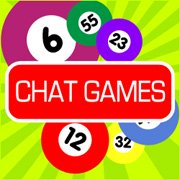 Choose any two numbers that add up to 21, (19 and 2 for example) at the start of the game. As soon as the announcers calls your two numbers, enter “BLACKJACK” and both of the numbers you have chosen into the chat.

Before the game starts, choose any one of the letters from the word “bingo.” The first time any number is called that contains the letter you have chosen, type “ALPHABET SOUP” along with the number called. If you’re the first to do so, you win the chat game.

Each player picks three numbers that are in a row from the bingo board. If the announcer calls out your numbers, enter “TTT” along with your numbers into the chat box.

In GIN each player picks 3 numbers before the game starts- one from the “G” column, another from the “I” column, and a third from the “N” column. The first player who’s numbers are called during the game and types “GIN” along with their chosen numbers into the chat wins.