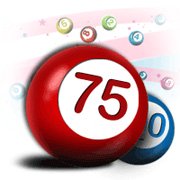 75-ball bingo is the most popular variation of bingo in the US. Bingo halls across the country have been playing this version of the game for decades. Players love the multiple pattern games that can be played, which have been described as the most innovative patterns of all the bingo game variations. Several churches hold weekly bingo games to raise funds. Bingo prize games are often played in lieu of raffles in local fairs, fundraisers, and other social events. Easy to play and understand, 75-ball bingo is possibly the most widely known game in North America.

Players betting on bingo games choose the pattern game they want to play and purchase their bingo cards before the game starts. The announcer starts the game by choosing the first ball at random and calling out the number printed on it. That ball is then set aside from the rest to avoid the same number being called twice. When playing in an online bingo hall, each number is selected by random number generating software. The numbers are marked on the number board for players to reference during the game, often with the last five numbers to have been called highlighted by a different color than the rest. The first player to complete the predetermined game pattern on any one of their cards shouts out, “BINGO!” and brings their card to the announcer for inspection.